Current “membrane based” instrumentation utilized at a large cell culture manufacturing site has presented recurrent problems including non-repeatable, inaccurate metabolite analysis, especially of Glutamine. These membrane / electrochemical technologies have shown inherent flaws in measurement stability and excessive maintenance at multiple sites. Newer optical-based metabolite analyzers were evaluated to determine whether superior measurement results with less frequency of calibrations could be obtained. The goal of this study was to evaluate Photometric Technology and compare its performance versus current units in use. The evaluation of metabolite analysis equipment was conducted using RANDOX assays in a model CA90 Photometric Analyzer.  PROAnalytics, LLC of Fairfield, NJ (technical representative/distributor for RANDOX), coordinated the evaluation, working with Upstream Process Development scientists at a large biopharma organization. 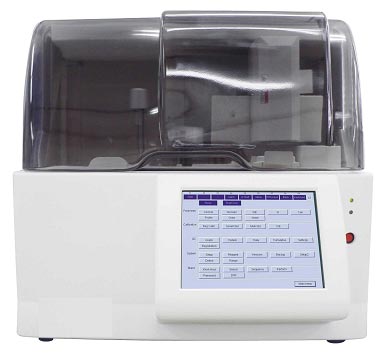 The optical / photometric analyzer is at its most basic form, a very accurate pipetting system and also a colorimetric detector. 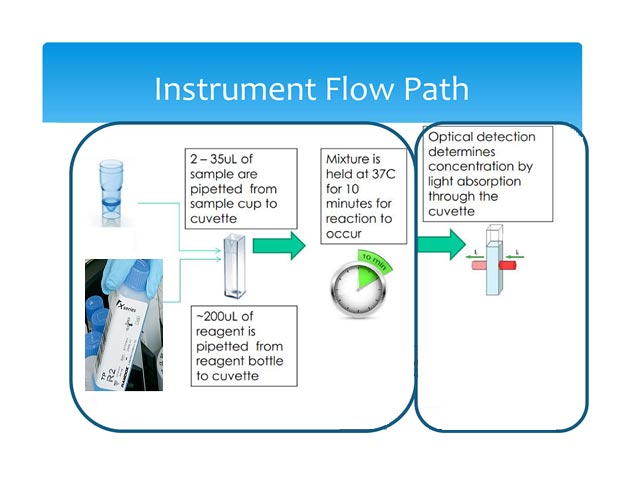 The CA90 instrument Pipettes 2-35uL of sample into a cuvette. Subsequently, the instrument pipettes 100-200uL of reagent for a specific metabolite into the same cuvette. The cuvette is then mixed and an enzymatic reaction occurs, which creates a color. The color concentration is read by optical detection system. The color concentration is correlated with a known metabolite concentration. Pipetting accuracy and repeatability is critical for the photometric technology. The CA90 instrument provides pipetting tests based on color dilutions, which can prove the accuracy and repeatability for GMP areas. In addition to special color testing reagents for metabolite analysis; Randox offers Standards / Controls, which are a material containing a known concentration of each metabolite. Many cGMP facilities load one Control sample along with their Normal sample types for every run. This additional data analysis proves to the FDA that the instrument has performed the process run properly by detecting an accurate concentration level of the metabolite within tolerances of the expected Control value. The software has been tested by the scientists and is found to be intuitive and user-friendly.  Simple sample loading will help eliminate any errors within the manufacturing facility: 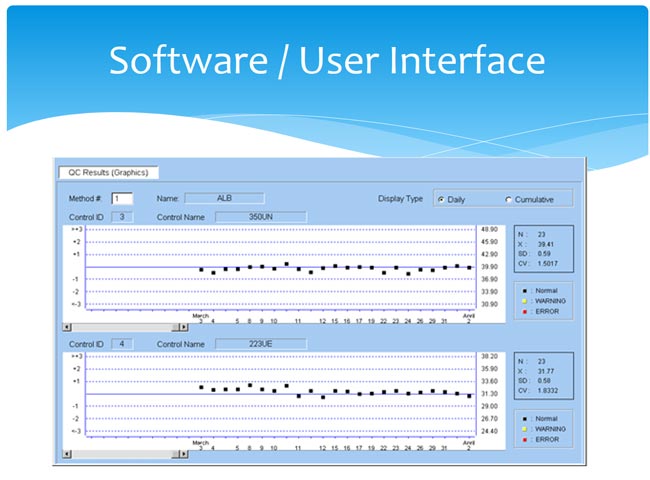 Randox has a full list of metabolite / analyte reagents available.  Some of the common biotech reagents are as follows: 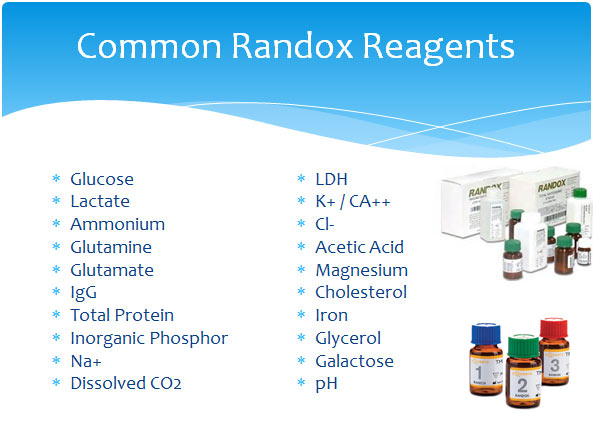 The CA90 instrument has one pipettor, which is self-cleaned. The CA90 is capable to hold up to 10+1 samples and up to 20 reagent bottles. The cooled reagent compartment is critical for reagent stability and extending lifespan: 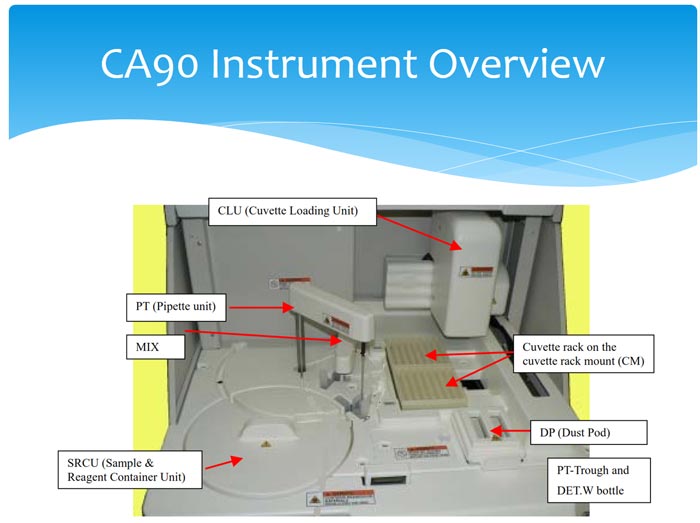 Maintenance is very simple for the photometric CA90 instrument.  On a daily schedule; an operator will check: that the 5L water container is filled properly, that there are enough disposable cuvettes loaded onto the instrument, and that there are enough reagents remaining.  The pipette will be wiped with alcohol on a daily basis. The instrument will automatically prime DI water through the system if not operated for greater than 12 hours. No special storage conditions need to be maintained while the instrument is not operating. Once per month, the liquid lines will be flushed for 15 minutes with a cleaning solution automatically, followed by flushing with DI water for 15 minutes. Twice per year the syringe pumps will be calibrated for accuracy, along with further cleaning of air and liquid filters. The halogen lamp will be changed when the CA90 instrument alerts that that component has been used for 1,000 hours. Calibrations are performed very infrequently – as little as every 2 or 4 weeks. Comparison of photometric and electro-chemical/membrane based platforms: 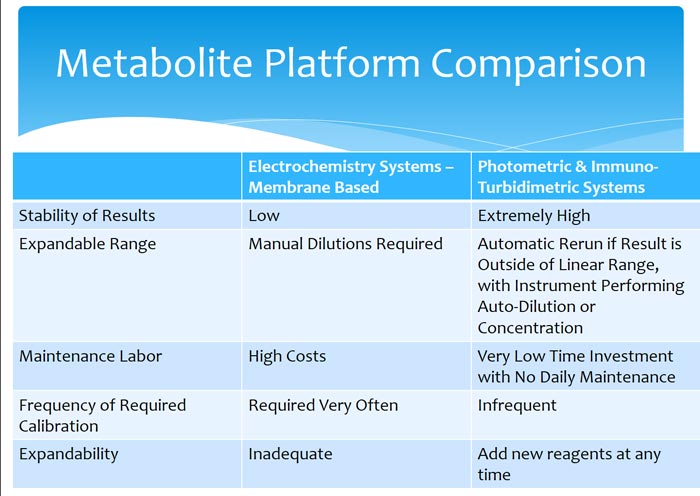 The instrument is already used within cGMP areas. Multiple levels of login credentials can be set, which the FDA recommends.

The study consisted in using Roche Standards with a CA90 provided by ProAnalytics, LLC, during a period of two months (26-Feb-2015 through 15-April-2015) and a membrane-based instrument already owned and maintained by the lab. The results are as follows (N = 6 and 0% on each graph = target Standard concentration). 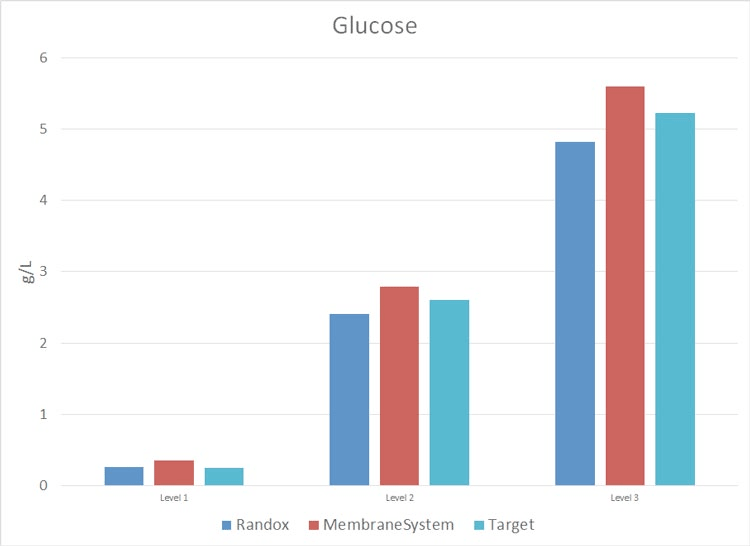 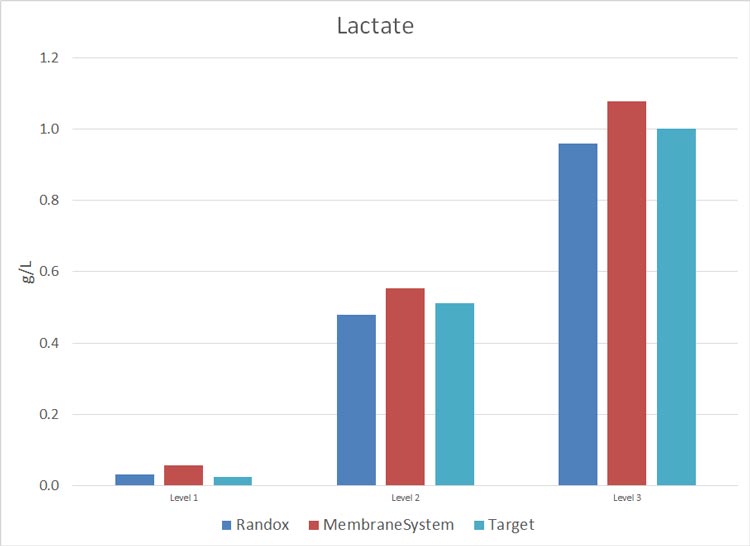 For critical metabolites: Glucose, Lactate and Glutamine, ProAnalytics’ CA90 offering performed to a much more accurate level than did the in-house membrane-based instrument. 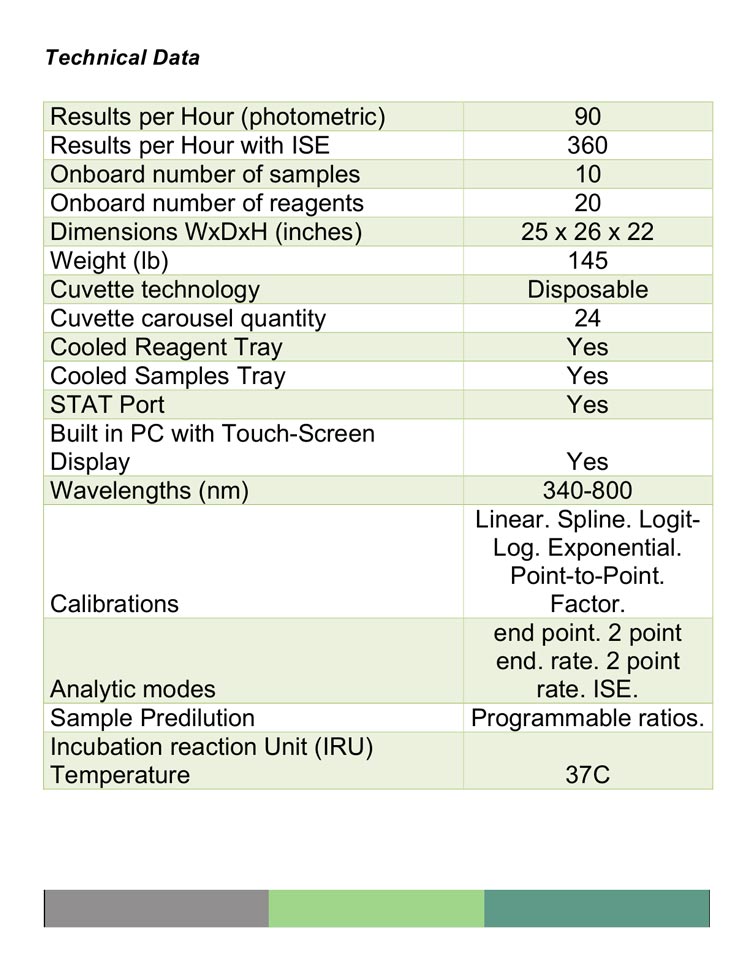 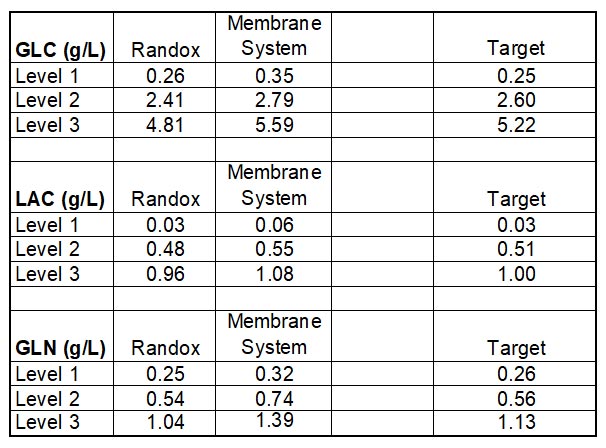